The most recent technology being utilized in various fields and sectors is artificial intelligence (AI). AI has been enabling noticeably dominant results as it continues to encroach into fields that were previously designated for human expertise. Similarly, AI is being used in the realm of software testing to streamline the automation testing process and offer higher quality results.

Artificial intelligence and Machine Learning algorithms are employed in the software testing technique to efficiently test software products. AI-based testing seeks to improve the efficacy and intelligence of the testing process. Logical thinking and problem-solving techniques can be used to use AI and ML in testing to enhance the entire testing process. Additionally, this testing methodology employs AI-based testing tools to carry out tests that are designed and carried out without the assistance of humans by using data and algorithms.

While ML enables computers to learn autonomously without any human involvement, AI algorithms can perfectly replicate human intellect. It’s interesting to note that AI and ML include the creation of specific and one-of-a-kind algorithms that can fetch the data, learn from that data by identifying patterns to inform judgments and apply these predictions to efficiently perform software testing.

Furthermore, businesses are gradually moving to technologies that can utilize AI and ML algorithms to successfully test software. Additionally, it has been observed that organizations gain a lot from AI-based testing because it enables speedier and continuous testing, full automation without human interaction, and faster ROI. 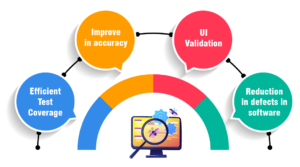 As AI can seamlessly verify the contents of files, data tables, memory, and internal programme states, it boosts test coverage. It aids in determining whether the programme performs as planned and provides adequate test coverage.

When performing UI testing on applications, AI’s image and pattern recognition capabilities work together to assist find visual defects. Making ensuring that every visual component is appealing and capable of operating effectively is helpful. Regardless of their size or shape, AI can recognize dynamic User Interface controls and analyze them at the pixel level.

The likelihood of human mistakes when using the manual testing approach is significant, particularly when doing repetitive activities. This human error-proneness is reduced with the aid of automation testing. However, the introduction of AI in automation testing has improved the handling of repeated jobs and improved the accuracy of the results. As a result, AI enhances test accuracy overall by removing even the smallest possibility of inaccuracy.

AI in software testing aids in quick and early problem detection, which eliminates flaws and makes the software dependable for users and bug-free.

Different AI-driven testing approaches and tools you can use for this. 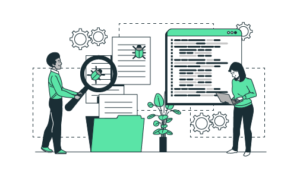 Mabl: Mabl is an automation platform designed for CI/CD. When something in the user interface of your app changes, it can auto-heal your tests. Mabl accomplishes this by gathering a lot of data about each of your UI elements so that, in the event that the XPATH, name, CSS, or other details change, it will be able to adjust and carry out the test to completion.

Tricentis: It enables teams to go beyond continuous testing by incorporating AI. It enables end-to-end testing of software applications to be automated. To test GUIs and APIs from a business standpoint, this tool combines multiple aspects of software testing (test case design, test automation, test data design and generation, and analytics).

Applitools: This is a new breed of test automation software that uses AI that is based on visuals. One of the important features is Applitools Eyes, which aids in expanding test coverage and reducing maintenance. Cross-browser and cross-device testing are both facilitated by the Ultrafast grid, which speeds up functional and user interface testing by 30 times. All current test frameworks and several testing modules, including Selenium, Appium, and others, are compatible with Applitools.

Percy: A pixel-by-pixel comparison tool, dynamic comparisons, and photo stabilization are just a few of the fantastic capabilities offered by Percy by BrowserStack, an all-in-one visual (UI) assessment platform. This programme provides parallel rendering, high-speed rendering, and cross-browser rendering. Percy works with groups to automate visual testing. Usually, this Percy is used to take screenshots, evaluate them against baselines, and show the visual changes.

OSS-Fuzz: It is a fuzz testing tool designed to increase the stability, dependability, and security of popular open-source software. This program combines scalable and distributed execution with contemporary fuzzing approaches. This program allows the use of Python, C/C++, Rust, and Go code.

Launchable: Launchable is built on an ML algorithm that forecasts each test’s likelihood of failing based on previous runs and whenever the source code under test changes. This tool allows the user to record the test suite in order to run the tests that are most likely to fail first. With the aid of this tool, a lengthy test suite can be run in a matter of minutes by selecting a dynamic subset of tests that are most likely to fail.

Businesses are embracing DevOps practices at an increasing rate as technology develops. However, as these approaches are adopted, there is a growing demand for reliable tools that allow continuous testing and continuous release. Here is how tools for test automation powered by AI come into play. Businesses are now capable of speedier tests and trustworthy products thanks to the arrival of AI in software testing.

In addition to supporting DevOps methods, AI-driven test automation technologies also add decision-making capabilities that are similar to those of humans, which ultimately speeds up the release of high-quality software. Utilize the next-generation testing services offered by a provider of next-generation testing services to obtain faster and higher-quality releases with greater effectiveness and accuracy.

We, at Odiware bring the latest technologies & industry trends to recommend the best-of-breed solutions to complex business challenges. We create a substantial upsurge in top-line figures that result in a tangible impact on the bottom-line of businesses. Contact us to know more about our testing services

One thought on “AI in Software Testing”

Are you ready for a better, more productive business?

Stop worrying about technology problems. Focus on your business.
Let us provide the support you deserve.